September 24, 2014
Here is one of those funny times when it's really easy to say, but harder to do. For some, giving an apology and meaning it can be two totally different things all together. When I was growing up, I will honestly say that I did as little apologizing as I could. Please don't think of me as cruel or heartless, it's just that when something happened to someone else I just didn't see the need to apologize especially if I had nothing to do with the problem. There were other times when I just wasn't simply aware that an apology was needed. I can recall many times when I mom forced me to apologize for something I might have said or done. Of course, I was not very happy for two reasons, one - I didn't like my mom forcing me to say 'I'm sorry' when I wasn't; and two - I felt like it wasn't my fault so why would I apologize for something I had nothing to do with the issue.

As I've gotten older, I have learned to be a little more cognizant of when an apology was needed. When I did say I was sorry, at least I meant it. I will have to say that I did learn that an "I'm sorry" could get me out of hot water, but I may not have really meant it at the time. As a young father, there were several times when I was in the wrong when it came to scolding my children for the naughty thing they did, but the way I punished them may have been incorrect. This is where Jaimee would step in and tell me directly that I should apologize to my child for the misuse of my discipline on my kid. It's funny because the way I reacted to my wife's command and my mother's command were identical. I did apologize to my child, but I would also leave them with the idea that they were still in the wrong for what they might have done...that is what the difference was between my wife and my mom.

Since I've been more aware of my surroundings things have changed for me in the case of apologies and even accepting them too. I know that might sound a little weird, but even accepting apologies from others was just as difficult. I guess to me I feel like either their apology is an empty one, meaning that they're not really sorry or I already know they are sorry, but I really don't need them to tell me that. Usually the look on people’s faces tells me whether or not they are telling to truth or flat out lying. I admittedly have apologized to people and look like I really meant it, but I didn't. This is a really tough emotion and social protocol that I have trouble with since I have Asperger's.

As the times change, the way we apology I think is getting even worse. It seems like lately the newer catch phrase for an apology is "My Bad". At first this really, really bugged me because I felt like it was more of a cop out apology than having at least a little remorse within the slander. In some ways, I adopted "My Bad" in uses more suited for sarcasm. I can be rather unemotional when I find myself saying that phrase to someone because even though I said, there would be a lot of resentment behind my comment. Other phrases like "That's on me" or "That's my screw-up", I find rather amusing, but I wonder if the meaning behind them has lost its luster. I realize as a society that we are willing to forgive people if they admit they were wrong and apologize for their misdeeds.  I wonder if they do exactly what I tend to do and say I'm sorry just to get people off my back rather than having to listen to all the rhetoric people would chime on about the wrongs I or others might have done. As a Christian, saying I'm sorry is one thing, but truly forgiving is the root of all healing for the wrongs that we do to each other.

Song of Inspiration [Check it out on iTunes or Android!]:

Album: Into The Light

Here's the lyrics to the selected song:

You'll noticed that I titled the posting "Hard to say I'm sorry" is an actual song sung by the group Chicago so here's the music video to this oldie but goodie! 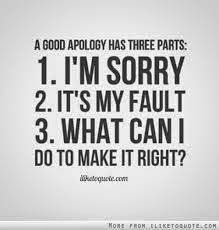 Popular posts from this blog

July 07, 2014
This might seem a little unusual for my blog to be talking about a certain person, especially one that I've never met in person, but he still has a special place for me because of how much we have in common...mostly because we both have Asperger's. Brant Hansen is or as of Monday July 7th, 2014 was a DJ for a national syndicated Christian radio station called Air 1. He and I have exchanged messages through Facebook from time to time in pleasant conversations, but we have come to a point that is a little more serious. Brant has never shied away from his disability and if anything he has been a positive voice to anyone who would listen about his Asperger's. As I mentioned though, Air 1 is ready to shut him down. Here is what Brant had to say about his departure from the radio station:

"If you've been a listener to our radio show, please know this: I’m heartbroken over the end of the show. I've counted every day as an honor to be able to have a platform like that.…
Post a Comment
Read more

August 20, 2011
If there was one program I was truly grateful for my parents signing me up in, it was the Boy Scouts of America. I'm sure the next question you're thinking is did I earn the final badge that is given...Eagle? The answer is...heck yeah! I'm very proud to say that I'm an Eagle Scout, since 1986! (Man, I'm gettin' old!) The other cool thing is that my brother is one as well! They were able to provide so many experiences and interesting times.

One thing I wished I knew was how many times my wife and I had crossed paths as we were growing up. There is one thing I can say though; every year our local mall (Metro North) would host the Boy Scouts exhibition. My troop, 314 (Sponsored by the Platte Woods United Methodist Church – My old church), would do the Indian dancing in the middle of the mall for literally, everyone to see. Jaimee remembers the times when she would watch us dance and make funny comments about the outfits...or there the lack of! It was more fun when …
Post a Comment
Read more