March 22, 2014
Here's an area of where I'm not sure most of the misunderstanding falls, because of my Asperger's or because I'm just a guy. I'm not really big on fashion, even in movies premiers or runaways; although I did like fashion movies like "The Devil Wears Prada" and "Zoolander". Dr. Temple Grandin wears cowgirl outfits and she looks great! When I was younger, I always thought I had a fashion sense, but I think I might have been sorely wrong. I always thought I was so well dressed that many of the other kids in school were just jealous; or so I thought. I did have second thoughts when all the girls just wanted to "be my friend" so I wasn't sure if it was the clothes or the person. As the art major that I was, I wanted to make sure I dressed for the part - especially in college. I mean, I was the president of the art club and I felt like I had to dress like I was the president...of course, later that next year I met a young beautiful woman who had a whole different opinion of my wardrobe, because let's face it...most of my clothes looked like I could have been Sheldon's twin brother from "the Big Bang Theory"!

When Jaimee came on to the scene, I think my mother was the happiest because she had been trying for years to get me to try new and better clothing, but I wouldn't have any of that! Jaimee pretty much raided my drawers and cleaned through my outfits. With my Asperger's, this did bother me a great deal, but I did learn to appreciate the effort she put in and with the new look; it made me feel better. In a small way, I let her do this because I loved her very much and I wanted to make her happy by making me look better (or handsome in this case). Jaimee was nice enough to let me keep a few things that meant something personal to me, but everything else had to go! For the dating year of 1989, a change in wardrobe was a grueling time, but I think it was something that had to be done.

Honestly, this has been a battle that Jaimee and I have had with the twins as well. Christen hasn't been as bad because she likes to get new clothes and loves to go shopping with Jaimee; Sarah, however, is completely different. Her wardrobe is extremely limited because there are a only few outfits she can feel comfortable in. The texture can be a deal breaker for Sarah and even the color. Green is both her and mine favorite color, but Sarah would rather wear mostly green outfits if she could. She is trying to open up a little more too different styles and colors. I think this has to do with her maturity and knowing that college is coming soon. I'm proud of both the girls for opening up to the fashion sense that Jaimee has and her skills to make them look good. I know she has worked hard on them.

Currently, my fashion has hit a few new issues, my age, body shape and finances. As a teacher, I'm required wear slacks, a nice shirt like a polo or button shirt and comfortable shoes. (Fridays, we get to wear jeans!) I pretty much stick close to the dress code, but I will admit that I tend to wear the same shirts and pants from week to week and you can guess what ends up happening...they wear out! Sadly, I don't always pay close attention to the condition of my clothes; that's where Jaimee steps in again. Clothes’ shopping has never been an event I've looked forward too. Jaimee tends to drag me into the stores to find replacement clothes for all the other clothes that sport the ones with holes in them. I know she just wants me to look good and not some complete dork, of course with my Asperger's, I really don't care what anyone thinks anyway...except my wife. I do try to look handsome for her because she's worth it.

Song of Inspiration [Check it out on iTunes or Android!]:

I know this is more about female looks and fashion, but I believe the general message is still the same. Enjoy the video to my song of inspiration.


And here is the Sheldon Cooper fashion trend that was a lot like mine! 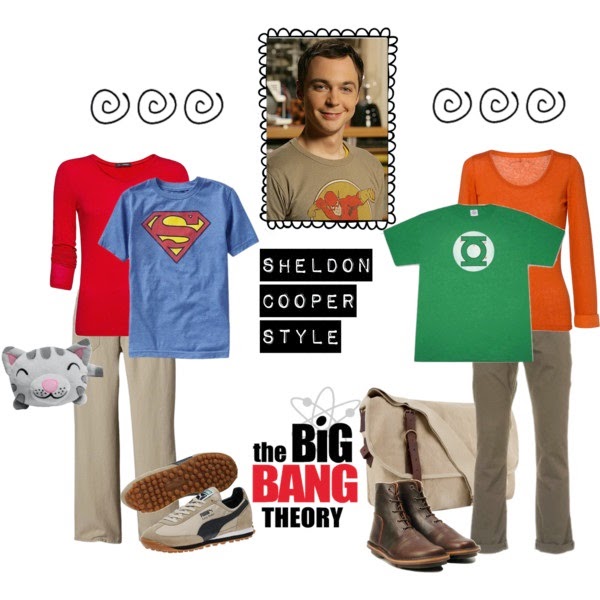 Popular posts from this blog

September 24, 2014
Here is one of those funny times when it's really easy to say, but harder to do. For some, giving an apology and meaning it can be two totally different things all together. When I was growing up, I will honestly say that I did as little apologizing as I could. Please don't think of me as cruel or heartless, it's just that when something happened to someone else I just didn't see the need to apologize especially if I had nothing to do with the problem. There were other times when I just wasn't simply aware that an apology was needed. I can recall many times when I mom forced me to apologize for something I might have said or done. Of course, I was not very happy for two reasons, one - I didn't like my mom forcing me to say 'I'm sorry' when I wasn't; and two - I felt like it wasn't my fault so why would I apologize for something I had nothing to do with the issue.
As I've gotten older, I have learned to be a little more cognizant of when a…
Post a Comment
Read more

July 07, 2014
This might seem a little unusual for my blog to be talking about a certain person, especially one that I've never met in person, but he still has a special place for me because of how much we have in common...mostly because we both have Asperger's. Brant Hansen is or as of Monday July 7th, 2014 was a DJ for a national syndicated Christian radio station called Air 1. He and I have exchanged messages through Facebook from time to time in pleasant conversations, but we have come to a point that is a little more serious. Brant has never shied away from his disability and if anything he has been a positive voice to anyone who would listen about his Asperger's. As I mentioned though, Air 1 is ready to shut him down. Here is what Brant had to say about his departure from the radio station:

"If you've been a listener to our radio show, please know this: I’m heartbroken over the end of the show. I've counted every day as an honor to be able to have a platform like that.…
Post a Comment
Read more

August 20, 2011
If there was one program I was truly grateful for my parents signing me up in, it was the Boy Scouts of America. I'm sure the next question you're thinking is did I earn the final badge that is given...Eagle? The answer is...heck yeah! I'm very proud to say that I'm an Eagle Scout, since 1986! (Man, I'm gettin' old!) The other cool thing is that my brother is one as well! They were able to provide so many experiences and interesting times.

One thing I wished I knew was how many times my wife and I had crossed paths as we were growing up. There is one thing I can say though; every year our local mall (Metro North) would host the Boy Scouts exhibition. My troop, 314 (Sponsored by the Platte Woods United Methodist Church – My old church), would do the Indian dancing in the middle of the mall for literally, everyone to see. Jaimee remembers the times when she would watch us dance and make funny comments about the outfits...or there the lack of! It was more fun when …
Post a Comment
Read more